Originally operated by 9th Staffel of the III./JG3 as Yellow 9, this aircraft was initially tested by the Red Army Air Force Research Institute NII-VVS, before arriving at Eglin AFB, Florida on 21 March 1944. Tested by the evaluation Branch of the USAAF, it was at first coded as EB-1, later becoming EB-100.

It was presented to the USA by the USSR in November 1942 as a goodwill gesture after a visit to Moscow by Wendell Wilkie, the US Secretary of State.[1] 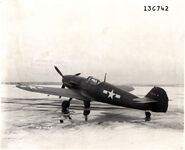