Allocated to 1./JG 301 (Epinoy), 412951 was used by it's unit's Staffelkapitan, Leutnant Horst Prenzel, for a two and a half hour Wilde Sau sortie on 21 July 1944. Landing at what he thought was an airfield in Belgium, Prenzel discovered he was actually at RAF Manston in Kent,[3] and was now a POW.

Allocated UK serial TP814, the aircraft was flown by Captain E. M. Brown at Farnborough on 25 August 1944,[4] before being used for tactical trials by the Air Fighting Development Unit against a Spitfire LF.IX, a Spitfire XIV and a Mustang III (P-51C).[5] 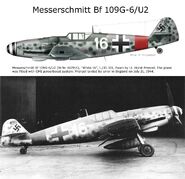 As flown by Eric 'Winkle' Brown