Without rotor blades at Freeman Field

The 23rd example built, Fl 282 V23 Werk.Nr.280023 was assigned to Transportstaffel 40 (TS/40) as CI+TW. Upon it's capture near Bad Tölz in Germany[1], 280023 became FE-4613, and was featured in the Foreign aircraft exhibition at Freeman Field on 30 September 1945, with the rotor blades removed. In March 1946, the Air Technical Service Command became Air Material Command and it was around this time the “FE” numbers, assigned to captured Luftwaffe aircrafts, became “T2” being the organization designator for Air Technical Intelligence. The prefix “FE” (meaning Foreign Equipment) changed to “T2” but the inventory numbers did not change, FE-4613 becoming T2-4613. 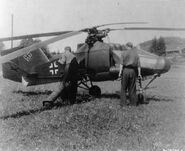 The airframe is currently believed to be with the National Museum of the USAF, Dayton, Ohio.