This aircraft, originally 5F+CM of 14.(F)/AufklGr.4, was intercepted by RAF fighters while on a reconnaissance mission, and forced down near Goodwood Racecourse, Sussex. The pilot, Oblt. Friedrich Karl Runde, managed to put it down in relatively good condition.

The RAE repaired this aircraft with parts from Bf 110 2N+EP of 9./ZG76 (formerly flown by Oblt. Gerhard Kadow) that was shot down near Wareham on 11 July 1940 and, after handling trials, it was flown on 13 October 1941 as AX772 to the AFDU at Duxford. In March 1942 the aircraft was transferred to No. 1426 (Enemy Aircraft) Flight until moving to the Enemy Aircraft Flight of the Central Flying School at Tangmere in January 1945. 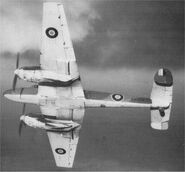