Edit
watch 01:36
We're Getting Mutants in the MCU - The Loop
Do you like this video?
Play Sound

Running up the engine for its first test flight. Photo from Australian War Memorial[1]

Built by Nakajima between April to December 1942. The manufacture number of this aircraft is unknown, it can be either Ki-43 C/n 400, Ki-43 C/n 426, Ki-43 C/n 622, Ki-43 C/n 779 or Ki-43 C/n 805. Delivered to the Japanese Army Air Force (JAAF) as Type 1 Hayabusa Ki-43-I Ko (Allied code name "Oscar"). Assigned to the 11th Sentai. During 1943, this aircraft operated from Lae Airfield. It was abandoned largely intact, but with the tail rudder and fabric surfaces damaged and the cockpit canopy glass missing.[2] This aircraft was in Japanese service painted with green upper surfaces with the fuselage Hinomaru outlined in white. The rear had a white vertical stripe rear aft of the Hinomaru. The leading edge of the wing had a yellow recognition stripe. The tail had the the lightning bolt motif of the 11th Sentai.[3]

The aircraft when found

Men from ATAIU working on a Japanese Oscar (XJ002) inside Hangar 7 at Eagle Farm Airfield in Brisbane, Australia in 1944 via http://www.hangar7.org.au/ 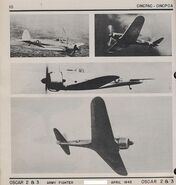 Early recognition manual, with US markings

Taking off at Hangar 7. Hangar 8 is being built in the background.

While being restored, most of the green paint was stripped off to bare metal. After restoration, the aircraft was painted green with U. S. markings and tail code XJ002 in black on both sides of the tail.[3] Later the aircraft was repainted in japanese markings for recognition manual purposes. 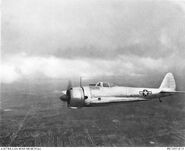