On 6 October 1940, MM5701 and the other 18 Gruppo CR.42s moved from their base in Novi Ligure, northern Italy to Maldegem, Belgium, near the Dutch border, to operate as part of the Corpo Aereo Italiano (CAI), flying via Neubiberg and Frankfurt-am-Main, Germany, reaching Ursel on 19th October after being held up by bad weather. Temporarily attached to 56 Stormo, the unit's aircraft carried the squadriglia shield (the claw of an eagle) and the Gruppo shield (an axe with three arrows diagonally enclosed in a vertical rectangle and the motto ocio che te copo. The unit was also given the Luftwaffe designation 18/JG56. The fighters could only operate over England for about ten minutes due to limited fuel capacity/range.

On 11 November 1940, Twenty-two CR42s took off at 1200 hours from Eechlou (modern Eeklo), Belgium and climbed to 18,000 feet. Before the actual combat MM5701, flown by 23-year-old Sergente Pilota Pietro Salvadori broke an oil pipe, fell behind the formation, and the engine overheated. He pressed on and force landed on the shingle beach at Orfordness, Suffolk. C.¼ mile north of the lighthouse, at c.13.45 hours.

His 18 Gruppo 95 Squadriglia Caccia Terrestre aircraft bore the fuselage marking 13 crest 95 and the serial MM5701 under the tail.[N 1] Salvadori was taken prisoner and was apparently very proud of his landing when he simply nosed gently over on the shingle. [2]

When interrogated by the British, Salvadori commented that he was happy to be out of the war, was dissatisfied with the Italian officers, and didn’t like Belgian weather, the Germans, or their food![N 2] 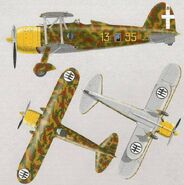 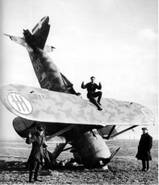 MM5701 was flown to RAE Farnborough with a Hurricane escort, since the aircraft still carried Italian markings, on 27 November 1940. After arrival at Farnborough, it was given it's RAF serial, with Italian markings painted over with RAF roundels, and underwent a thorough examination by RAE staff. Limited flights were carried out at Farnborough by Sqn Ldr Wilson.[N 3]

BT474 was flown from Farnborough to the AFDU, Duxford on 28 April 41 by W/C J E Campbell-Orde, to enable that unit to develop tactics against the type through mock combat with various type of RAF fighter.[N 4]

The aircraft was flown quite extensively at the AFDU; the logbook of Pilot Officer R J W Brown (DoRIS Ref: MF10116/18) records several flights in the aircraft, as detailed below:

Trials with the aircraft were complete by October 1942. [N 5]

The Air Historical Branch wrote to No.41 Group requesting allocation of the aircraft for preservation on 12 December 1942. This was followed by a telegram, sent to No. 1426 (Enemy Aircraft) Flight at Duxford on 9 January 1943, requesting packing of the Fiat and fellow museum piece Bf109E DG200.

With evaluation of this obsolete type complete, the only (belated) entry on the aircraft's RAF movement card, dated 12 December 1943, records - `This aircraft for packing for permanent storage' and cases marked `Museum Material'.

PRO file AIR 2/10, 185 entry for 9 November 1944 records the Fiat and Bf109 moved from Purgatory site to No.52 MU Cardiff where several other AHB aircraft were collected from August 1944; however, due to the need for the Bellman hangar at Cardiff where the Museum aircraft were stored to be used for timber storage, BT474 was moved in its single case to No. 76 MU Wroughton, Wilts c. December 1944.

By 1949, BT474 was at GAFEC Stanmore Park, Middlesex, before being moved from Stanmore Park to No.15 MU Wroughton for further storage alongside other AHB aircraft during late 1955, and then to AHB store at RAF Fulbeck, Lincs in mid 1958.

During June 1960, the aircraft went to No. 49 MU at RAF Colerne, Wilts for refurbishing along with the Ju88 and Ki100 from the AHB collection, before going to RAF Biggin Hill by 1961, with restoration taking place during 1964.[5]

Further restoration, including complete stripping, was carried out at RAF St Athan between January 1973 and Mid 1974, including recovering and paintwork by trainee painters and finishers of 94 entry, D Flight No.2 TTS St Athan. BT474 was returned to its 95a Squadriglia 18 Gruppo colours as 95-13/MM5701, although there are errors in the camouflage scheme details and squadron insignia. [7]

During September 1974, the newly restored aircraft was displayed at RAF St Athan's Battle of Britain Open Day. The aircraft was allotted Maintenance Serial 8468M at St. Athan on 13 February 1976. During October 1978, MM5701 was moved to RAFM Hendon for display in the new Battle of Britain Museum, where it remains at the time of writing.[8]