EJ709 was delivered to B.82 Grove, Holland, in October 1944, for assignment to 274 Sqn. On 15 October F/O G.T. Kennell (RNZAF) flew an armed reconnaissance mission over Münster in EJ709. At circa 11.35 he was hit by flak and crashlanded 5 miles S/W Wageningen, survived the crashlanding and was taken Prisoner of War.

The aircraft was salvaged by 2./Versuchsverband O.K.L. and ferried to Finow, where the damage was estimated to be 15 %. At Finow, the Tempest was repaired with parts of a Tempest which was shot down at Thiene near Hesepe on 29 December 1944. The repair of EJ709 was finished on 4 January 1945.

Hans Werner Lerche, a Rechlin test pilot, ferried the Tempest to Rechlin at the end of January. In his book "Luftwaffe Test Pilot: Flying Captured Allied Aircraft of World War 2" he writes about testing Tempest EJ709. Because of problems with the engine the testing was fraught with problems, but Lerche made test flights with the Tempest, which was still at Rechlin, in mid-April 1945. The fate of EJ709 is not known.[1] 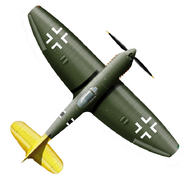 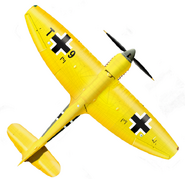