The last surviving Nakajima 'Gekko', a J1N1-S with C/n 7334, was built by Nakajima. It was delivered to the Imperial Japanese Navy Air Force (IJNAF) and assigned to the Yokosuka Kōkūtai. Its tail code was ヨ-102 (Yo-102).[1]

The exact wartime history of this aircraft is unknown, but it survived the Pacific War intact and was surrendered at Yokosuka Airfield.[1]

C/n 7334 was one of four intact Irvings surrendered to American forces (three were surrendered at Atsugi Airfield and C/n 7334 at Yokosuka Airfield). Irving C/n 7334 was assigned Foreign Equipment number 3031 (FE-3031). Irving C/n 7334 was loaded aboard USS Barnes (CVE-20) together with other captured Japanese aircraft and departed on 3 November 1945 for the United States. Records show that, after arriving aboard the USS Barnes on 8 December 1945, air intelligence officials assigned the Nakajima J1N1-S Gekko C/n 7334 to Langley Field, Virginia. On 23 January 1946 the aircraft was moved to the Air Materiel Depot at Middletown, Pennsylvania and was designated T2-700. 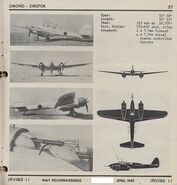 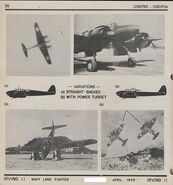 The Maintenance Division at Middletown prepared the J1N1-S Gekko for flight tests, overhauling the plane's engines (it was using the same Nakajiima Sakae make/model as the A6M Zero had used) and replacing the oxygen system, radios, and some flight instruments with American equipment. Mechanics completed this work by 9 April. The Navy transferred Gekko C/n 7334 to the US Army AIr Force in early June, and an army pilot flew the Gekko on 15 June 1946, for about 35 minutes. At least one other test flight took place before the Army Air Force flew the fighter to an empty former Douglas C-54 factory at Park Ridge, Illinois, for storage. The remaining three Gekkos were reportedly scrapped.[2]

In 1949, the J1N1-S Gekko was given to the Smithsonian's National Air Museum, but remained in storage at Park Ridge, Illinois. The collection of museum aircraft at Park Ridge numbered more than 60 airplanes when the war in Korea forced the United States Air Force to move it to the Paul E. Garber Preservation, Restoration, and Storage Facility in Suitland, Maryland. Gekko C/n 7334 was dumped outside the restoration facility in a large shipping crate in 1953, where it remained until building space became available in 1974. In 1979, NASM staff selected Gekko C/n 7334 for restoration.

Following restoration of the museum's Mitsubishi Zero in 1976, the J1N1-S Gekko became the second Japanese aircraft to receive the skilled attentions of NASM restoration craftsmen. The airframe was found to be seriously corroded from having remained outside for twenty years. At that time, it was the largest and most complex aircraft restoration project the NASM had ever undertaken. Work started on 7 September 1979, and ended 14 December 1983, following 17,000 hours of meticulous, dedicated labor. Today, Gekko J1N1-S C/n 7334 is fully restored and on display in the Steven F. Udvar-Hazy Center in Chantilly, Virginia.[3]