This article - C/n 7102 - is a stub. You can help the Captured Wings Wiki by expanding it.

This aircraft was captured on 30 January 30 1945 at Clark Field, Luzon, Philippines and repaired and applied with US markings and tail stripes. Assigned tail code S9. Tested by TAIU-SWPA at Clark Field, Philippines, during April 1945 with the underwing and fuselage mounted guns removed, to resemble the N1K2-J configuration.

Afterwards (or postwar) this aircraft was scrapped or otherwise disappeared..[1]

As it was found. 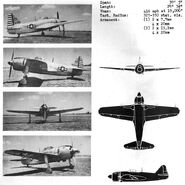 As in the CINCPAC-CINCPOA recognition manual.

A profile in colour. The vertical tail stripe was probably blue and not red.[2]