61-120 in its original colours at Aslito Field, Saipan

On 18 June 1944 it got captured, together with a lot of other Japanese aircraft, by US Marines at Aslito Field, Saipan. In july 1944 it was, together with thirteen other Mitsubishi A6M Zero aircraft (mostly A6M5 Model 52 aircraft) and a Nakajima B5N2 Kate, transported to the USA onboard the escort carrier USS Copahee (CVE-12) by TAIU-POA, arriving in the San Diego on 28 July 1944. 5357 was allocated number TAIC 5, and flight tested at NAS Anacostia at Patuxent River, Maryland. One of the pilots to test fly it was was Charles Lindbergh.[1] The aircraft was ferried back to San Diego on 11 January 1945, where frontline combat pilots were also given a chance to check out the Zero. Altogether, Zero No 61-120 logged over 190 hours of flight time in the USA before being declared surplus after the war.[2]

Being rebuilt at NAS Anacostia 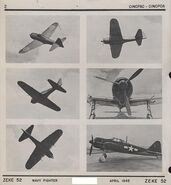 Being rebuilt together with TAIC 6, the B5N2 Kate

When testing was done and over with, 5357 was saved for futurity by being sold to Edward T. Maloney who at first had no room to exhibit the aircraft, so it was put into storage. On 12 January 1957 Maloney opened his "The Air Museum" in Claremont, California where he put -amongst others- 5357 to display, carrying painting scheme V-101 and later its own original 61-120. In 1965 the Air Museum moved to Ontario Airport, Ontario, California. In 1970 redevelopment of the airport at Ontario forced The Air Museum to move again. The non-flyable aircraft became part of the "Movie World: Cars of the Stars and Planes of Fame Museum" in Buena Park, California, near Knott's Berry Farm, while the flyable aircraft moved to Chino Airport, about 30 miles (48 km) away.[3]

In 1978 5357 was made airworthy again, using an original Nakajima Sakae engine -This aircraft is the only authentic, flying example of the Mitsubishi A6M5 Zero Model 52, with its original Sakae engine[1]-, getting the license N46770 on 3 May 1978. After that the aircraft made a six month journey, from July 1978 till early 1979, to Japan, making it the first A6M Zero to fly over Japanese soil since WW2. Back in the USA it got damaged during a landing at Chino on 25 June 1982, but got repaired. Another tour in and over Japan followed in 1995 and it also appeared in the movie "Pearl Harbour". The aircraft left Chino 30 October 2012 in containers for yet another visit to Japan for displays, returned crated at Chino in November 2013. After returning from the Tokorozawa Aviation Museum in Tokorozawa, Saitama, the aircraft was returned to the Planes of Fame Air Museum for another restoration. The aircraft now flies in it's original paint scheme when it was captured at Aslito Airfield.