The Akutan Zero as TAIC 1

This article - C/n 4593 - is a stub. You can help the Captured Wings Wiki by expanding it.

Built, according to the identification plate, by Mitsubishi on February 19, 1942 at their Nagoya plant as c/n 4593. Delivered to the Imperial Japanese Naval Air Force (in short JNAF). Assigned to the light aircraft carrier Ryūjō with tail code D1-108.

D1-108 c/n 4593 took off from the Ryūjō on a mission over Dutch Harbor as part of a diversionary raid prior to the Battle of Midway in June 1942. At Dutch Harbour it was hit by ground fire and had to make a forced landing on Akutan Island -hence the nick name 'Akutan Zero'[1]- with the landing gear extended. D1-108 flipped over in the soft marsh, killing the pilot, Pilot Officer Tadayoshi Koga -hence the other nick name, 'Koga's Zero'[2]- on impact.

The wreck of c/n 4593 was spotted on 10 July 1942 by a Consolidated PBY Catalina piloted by Lt. Williams Thies[3]. A US Navy team, lead by Lt. Thies, visited the crash on 11 July 1942 and found the Zero upside down and damaged, but still repairable. c/n 4593 was carefully lifted and transported aboard a barge to Dutch Harbor and then to NAS North Island near San Diego, arriving there in August 1942. By October 1942 it was repaired and ready for flight evaluation.

Back in the air

c/n 4593 was tested in the San Diego area, with US markings applied on wings and fuselage and with the assigned designation TAIC 1 on its tail. During the tests the Zero was flown against various American fighters, including a Lockheed P-38F Lightning, a Bell P-39D-1 Airacobra, a Curtiss P-40F Warhawk, a North American P-51 Mustang and a Vought F4U-1 Corsair. Later TAIC 1 was sent to Langley Field for installation of flight performance equipment and afterwards to the Pax River Naval Air Flight Test Center (in short Patuxent), Maryland. 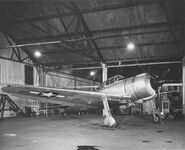 The Akutan Zero was destroyed during a training accident in February 1945. From the wreckage, William N. Leonard salvaged several gauges, which he donated to the National Museum of the United States Navy. The Alaska Heritage Museum and the Smithsonian National Air and Space Museum also have small pieces of the Zero.[4]