The A6M5 with C/n 4361 was built by Nakajima Hikoki K.K., with an estimated date of assembly somewhere in April 1944. It was the 361th A6M5 Zero produced by Nakajima. Painted dark green with gray lower surfaces and assigned to the 261 Kōkūtai of the Imperial Japanese Naval Air Force (JNAF), carrying tail code 61-131. During March 1944 this aircraft and others of the 261 Kōkūtai operated from Aslito Airfield on Saipan.[1]

During the night of 16 to 17 June 1944 captured intact by the US Army 27th Infantry Division. Later during July 1944, this Zero was one of fifteen aircraft (plus spare engines) loaded aboard USS Copahee (CVE-12). All were transported to the United States for technical evaluation by TAIC. During 1944-1945, this Zero was evaluated in the United States by either the US Navy or the US Army AIr Force with an as yet unknown code designation. Damaged beyond repair when ground looped at El Paso, Texas en route to NAS Anacostia, Maryland on 10 August 1944.[2] 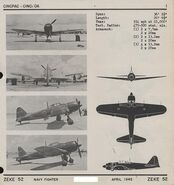 In the Cincpac-Cincpoa recognition manual