C/n 3372 was built by Mitsubishi on 21 October 1941. Originally it was assigned to the 22nd Koku Sentai Shireibu Fuzoku Sentokitai and flew there with tail-code V-172. While on transfer to Saigon, French Indochina with a scheduled stop for refueling on Hainan Island, c/n 3372 was captured 26 November 1941 -so even before Pearl Harbour- when it ran out of fuel due to bad weather and force-landed, together with V-174, on the coast near Qian Shan on the southeastern coast of Leichou Panto.[1] Transport of the aircraft parts to Liuchow, a place where it could safely be restored, took several months.

There it was rebuilt by Chinese engineers, combining parts of the two aircraft and tested by TAIU-CHINA as P-5016. 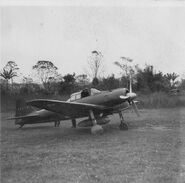 After an eventful journey to USA,[2] it was rebuilt again, now by Curtiss Aircraft, which again took some months before it could be flown. When it eventually flew again in March 1944 at Wright Field, Ohio it was as EB-2.

Later it was further tested at Eglin Field, where the tail number of the Zero was changed for the final time, now from EB-2 to EB-200.[2]

In the last war year it went on a War Bond tour and vanished somewhere in California, where it was probably scrapped.