C/n 3008 was attached to the 201st Kōkūtai and was used to help defend the area of Manila. This particular aircraft had previously been attached to the 381st Kōkūtai S-602 hikotai with the previous unit code being overpainted. According to one intelligence report that previous code was 81-124, but it carried none when captured.[2]

3008 was found in February 1945 on Dewey Boulevard, Manila (now Roxas Boulevard) in the Philippines, which had been used as an ad-hoc airstrip by the Japanese. The Raiden was moved to Clark Field, Philippines for testing by TAIU-SWPA as S12, where it was stripped of paint and finished in US markings with pre-war tail stripes. S12 made only two test flights of 3 hours 20 minutes duration, before an oil pipe failed causing the engine to seize up, and was later destroyed on the ground when a North American B-25 Mitchell bomber collided with it..[3][4]

A cockpit picture shortly after capture in February 1945. Photo via Robert C. Mikesh. 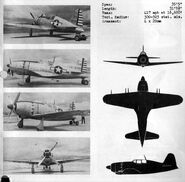 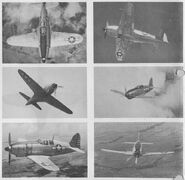 Another page from the recognition manual by TAIU-SWPA