Built by Mitsubishi with C/n 2846. Assigned to the 10th Reconnaissance Sentai[2] of the Japanese Army Air Force (JAAF). No known markings or tail code. Operated from Hollandia. Abandoned largely intact at one of the Hollandia area airfields.[3]

On 23 April 1944 this aircraft was captured by US Army troops when they liberated the Hollandia area. During September 1944, this Dinah was repaired by ground crews from the 5th Air Force, 3rd Attack Group, 89th Attack Squadron to airworthy status. I was repainted with US star-and-bar markings and with a red and white stripped rudder, bordered at the tail in blue. On the nose at first the squadron emblem of the 89th Attack Squadron was applied and later to be replaced with the group emblem of the 3rd attack group, the "Grim Reaper". 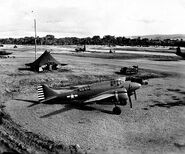 During January 1945, shipped to the United States aboard USS Attu. It was test flown at Patuxtent, NAS Anacostia and Eglin AFB.[4] Last mentioned on 29 May 1945, when it had a taxiing accident at Eglin Field. Ultimate fate unknown, likely scrapped.