Assigned to the 68th Sentai, 2nd Chutai, c/n 263 was initially flown by Chutai commander Captain Shogo Takeuchi, who passed it to another pilot when he started flying a Ki-61-Hei.[2] The aircraft was subsequently abandoned intact at the airfield where it was discovered by US forces at Tuluvu airfield, Cape Gloucester on 26 December 1943.[3]

C/n 263 was stripped of exterior paint and markings in May 1944, allocated test serial number XJ003, repainted with a set of Star and Bars insignia, and test flown at Hangar 7 at Eagle Farm, after which the engine was rebuilt. The following month, the US TAIU contingent were ordered back to Naval Air Station Anacostia, Washington DC, to form what would become TAIC.

Another view of XJ003

XJ003 in flight over Brisbane

By July c/n 263 was among the aircraft, equipment, documentation and personnel aboard a 'Victory Ship' heading for San Francisco, from where the whole establishment were taken by train to it's new 'Hangar 151' facility at Washington. Upon arrival c/n 263 was again scheduled for repair,[4] by which time it had been redesignated as TAIC 9.[5]

Another shot at NAS Anacostia 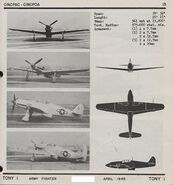 During January 1945, c/n 263 -by now possibly FE-263- was painted back in pseudo-Japanese markings and evaluated against the Wildcat, Corsair, Hellcat, Tigercat and Bearcat, but the tests were suspended when bearing metal was found in the engine oil.[3] The aircraft crashed at Yanceyville, North Carolina on 2 July 1945,[5] and was written off. 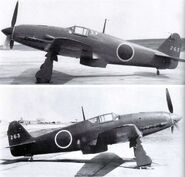 Right side in flight