Captured at Clark Field during January 1945 and assigned tail number S17. Evaluated and flight tested by TAIU-SWPA as aircraft no.17 at Clark Field, Luzon, Philippines, during June 1945.

This aircraft was transported to the United States aboard USS Long Island (CVE-1).

In 1952 it was sold to Edward Maloney, owner of the Ontario Air Museum (Planes of Fame Museum) and restored to flying condition.[4] 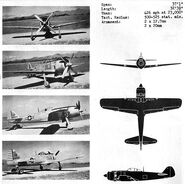 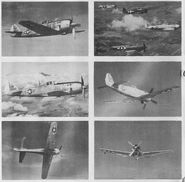 On board USS Long Island (CVE-1) to the USA

With TAIC in the USA 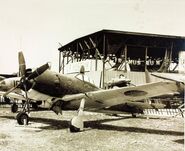 At the Air Museum

Just back in Japan, when still flying.

Part of the collection of the Planes of Fame Museum during 1952-1973. Appeared in the movie 'Never so few' in 1954. Made airworthy again in 1963 as N3385G. Sold to Ed Lykins, who sold it to the Japanese. Transported to Japan, it was exhibited at Arashiyama Museum near Kyoto until 1989, when that museum closed. Since 1997 it is part of the Tokko Heiwa KinenkanMuseum/Peace Museum For Kamikaze Pilots in Chiran[5].