This article - Black 29 (LaGG-3) - is a stub. You can help the Captured Wings Wiki by expanding it.

This LaGG-3, Black 29 was captured during the Continuation War, when it was shot down and made a forced landing near Aunus in February 1942.[2] The aircraft was recovered by Finns on 20 May 1942 and moved to a repair depot. After being restored, black 29 became LG-1 in Finnish service, and was assigned to LeLv 32 on 23 September 1942. This unit was based based at Nurmoila, on the Olonets isthmus.

According to the Finnish book "Punatähtestä hakaristiin" (from red star to swastika), this plane restored as LG-1, was silver 71, while black 29 was utilized only for spare parts. This looks strange, because black 29 appears in better conditions on photos, and it is in contrast with other sources.[3] 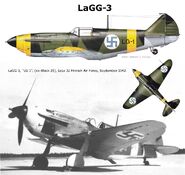 LG-1 was soon followed by LG-2 and LG-3. These aircraft were used to intercept the fast Petlyakov Pe-2s bombers often penetrating the Finnish air space. These missions were usually conducted by one LaGG only. A mission with two LaGGs (LG-1 and LG-3) was performed only on 27 October 1943, when a combat with a Pe-2 and two MiG-3s ended without any loss on both sides.[4] The aircraft's last flight was on 23 January 1945, after which the aircraft went into storage.[5]