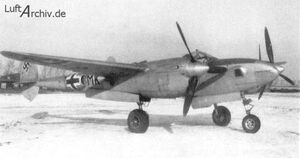 While serving with the 354th Air Services Squadron, this particular aircraft was stolen on Oct 13 1944 by USSAF pilot Martin James Monti (Italian-Swiss father and German mother) when he defected to the Axis side. Monti hitched a flight aboard a C-46 from his base in Pakistan, to Cairo, and then to Italy via Tripoli. He stole the plane from the 354th Air Service Squadron and landed this Lightning at Pomigliano Airfield near Milan in Italy, The Italians had captured the aircraft and handed it over to the Germans. The Lightning was overall bare metal but the Luftwaffe painted the entire underside bright yellow from mid-fuselage down with T9+MK Luftwaffe serials.[2]

The aircraft was recaptured by US troops at Schwangau during May 1945.