Picture of 1Lt. Strawbridge and "Evalina"[N 1]

Subsequently allocated to First Lt. Sam McMillan,[3] Evalina was hit by enemy gunfire and landed at the Japanese-held Suchin airfield in China, on 16 January 1945. [N 2] The pilot became a POW. The loss of the Mustang was recorded in MACR 11691.

The aircraft was rapidly seized by Japanese troops, and whatever damage the aircraft had taken was repaired rapidly. Hinomarus were painted over the American stars but the rest of the aircraft was left in its original scheme. “Evalina” was then flown back to the Japanese Army Air Inspection Center in Fussa (now Yokota Air Base) by Yasuhiko Kuroe, a 30-victory ace.

In Fussa, the Mustang's performance was evaluated by Kuroe, who recalls:

“I was astonished with its performance. Turn characteristics were splendid, almost the same as the Ki-84 in a horizontal turn. The radio transmitter was excellent, the armament and other miscellaneous equipment was very good, particularly when compared with their Japanese equivalents, and moreover it had a radio direction-finder.[N 3]

Its dash speed was inferior to that of our imported Fw 190A, but diving speed and stability during the dive were excellent. After fuel consumption tests we estimated it would be able to fly over the Japanese homeland from Iwo Jima. Some time later this came true.”

Evalina was later transferred to the Akeno Flying Training Division for further evaluation and mock combat against fighters such as the Ki-43, Ki-61 and . In mid-April 1945, Kuroe was placed in charge of a “flying circus” composed of captured Allied aircraft. The group toured Japanese fighter units to train pilots how to fight the opponent's aircraft. One of the pilots who benefited from this was a First Lieutenant from the 18th Sentai, Masatsugu Sumita, who recalled that he learned “how to take his aircraft out of the P-51's axis when being chased...”. At the time, the 18th Sentai was flying the Ki-100, one of the few Japanese types that matched the Mustang's general performances, albeit with inferior equipment. Kuroe claimed: “I had such confidence with this P-51 that I feared no Japanese fighters.”

The Japanese's impression of the Mustang was that it was an excellent all-round aircraft with no major fault and excellent equipment. The absence of oil leaks was surprising to most, as all Japanese engines leaked to some extent. Several pilots were invited to fly the fighter. Among them was Yohei Hinoki, one of the first to shoot down a Mustang in November 1943. [N 4]

“Major General Imagawa asked me to master the P-51 and then demonstrate it to other fellow pilots. I did not have a great deal of confidence in my ability to fly such an advanced aircraft with my disabled leg, but I made up my mind to do my best.

I flew to Omasa airfield and finally got a look at the P-51. I could see the superiority of its equipment, and its shiny fuselage with the open red mouth of a dragon. I saw several red dots on the side of the cockpit, probably recording Japanese aircraft the pilot had shot down. With the radiator under the fuselage, it looked very sleek and deadly.

It reminded me of the day I had first seen the P-51 in the sky above Burma on 25 November 1943. Major Kuroe, who brought the P-51 back from China, told me how easy the P-51 was to fly. Getting in, I was very impressed by the roomy seat and I did not have any trouble with my artificial leg on the rudder pedal. For me there were several new things about the aircraft. First of all there was the bulletproof glass, with a better degree of transparency than the thin Japanese glass; secondly, the seat was surrounded by a thick steel plate which I had never seen in a fighter before; there was an automatic shutter for the radiator, and an oxygen system which was new to me. Overall, it was better equipped than any Japanese airplane I had ever seen.”

Evalina was finally grounded by a burned-out generator[4] and, because no replacement parts could be found, was bulldozed into a lake.[1]

Evalina prior to her capture, with typical 51st FG markings.. © Gaëtan Marie.

This is how "Evalina" looked like after passing into Japanese hands. © Gaëtan Marie. 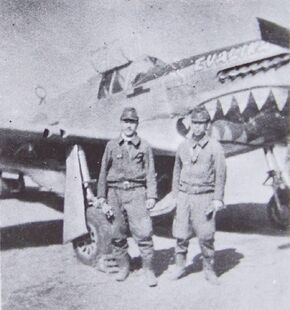 Two Japanese pilots stand in front of Evalina in Japan, possibly in Fussa.