41-17790 sits forlornly on a beach on the Dutch island of Noord Beveland, surrounded by admiring Germans.[1] 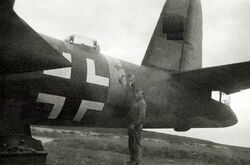